All over the world the tweets have been telling the same story  - Microsoft is now "more innovative" and "cooler" than Apple.

The Microsoft October event last week has sealed the deal. Industry watchers across the globe were mightly impressed by the innovative new products on display and proclaimed the Microsoft Corporation as having overtaken Apple.

Apple Demolished by Microsoft was the headline in MarketWatch, which went on to add "Microsoft hailed as winner over Apple following back-to-back events."

The Bizaare Role Reversal of Apple and Microsoft - Backchannel

Microsoft looks sexy again and, at the moment, a little more innovative than Apple - FastCompany

The twittersphere were in universal agreement with even die-hard Apple fans begrudgingly paying their respects. 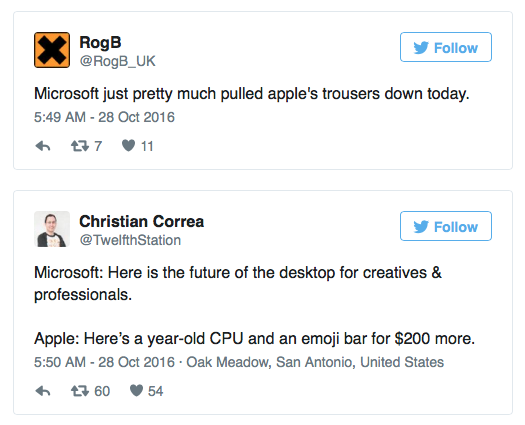 What 's caused all the uproar??

For a quick overview of all the new products on display watch the offical video below.