Microsoft has unveiled a host of new features in its core Office 365 portfolio at its Ignite conference in Atlanta last week.

Microsoft is going big on features powered by machine learning in its productivity services, with the announcement of a handful of updates to Office 365.

As part of its Ignite conference in Atlanta, the company unveiled a set of new capabilities for Word, Outlook, PowerPoint and Excel. Microsoft faces tight competition in the productivity space, and these services may help the company compete with Google for market share among businesses.

Tap for Outlook and Word

The new Tap feature in Word and Outlook makes it easier for people to pull information from relevant files around their organisation into an email or document that they're writing.  Using Microsoft Graph, frequently used Office items can be imported to your current document, without leaving the Outlook or Word window you have open. You can even import only select elements like slides, images, tables, graphics and charts.

A new chart type in Excel that transforms geographic data into high-fidelity visualisations. It recognises continents, countries, states and even councils as it is powered by Bing. If the data contained only countries within a single continent, maps dynamically updates and zooms into that continent. 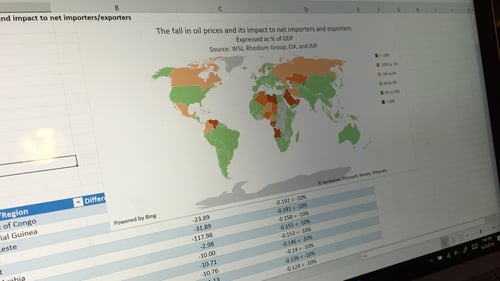 This feature gives users a curated outline for a topic they're working on, based on information in Bing. When users start a presentation, PowerPoint will ask for a topic. On demand it will present a list of templates based on that topic, along with some starter slides that can be selected for inclusion in the presentation.

Slides will be populated with information from the Bing knowledge graph, and Creative Commons-licensed images from the web. It will be available in the PowerPoint Windows desktop app later this year.

This feature gives users new options to lay out bulleted lists of text in more visually appealing ways. It's part of the company's ongoing push to make it easier for people to create visually appealing slides, without needing a professional degree in presentation creation.

This features lets users see how they compare to other people inside their organisation in relation to how they spend time at work. In addition to the private analytics information that users can see already, Microsoft is also going to roll out new capabilities for leaders and members of teams to help them work better together.