Tablets are no replacement for laptops - iPad sales dive 19%

No matter how often Tim Cook says it, consumers are not buying into the hype - iPads are not a replacement for a laptop.

Anyone who's tried to work on an iPad will tell you - it doesn't work!

Yes they're great for browsing, maybe a bit of email, but as for actually creating...there's serious limitations. Ever try editing an excel spreadsheet on an iPad?!

And sorry Tim, but iOS is not yet a replacement for macOS, and until it is, the iPad has no chance at replacing the Macbook.

Why is iPad declining?

Apple reported this week that iPad sales had fallen 19% in the first quarter, 2017.

To be fair, it’s not just the iPad. Demand for tablet computers around the world is slowing down. This chart (compiled by Statista and based on research by IDC) shows how sales have fallen between 2014 – 2016, and the trend is continuing.

Tablet sales across the board are declining. (Note: except possibly in China where bouyant sales helped prop up iPad's quarterly figures). 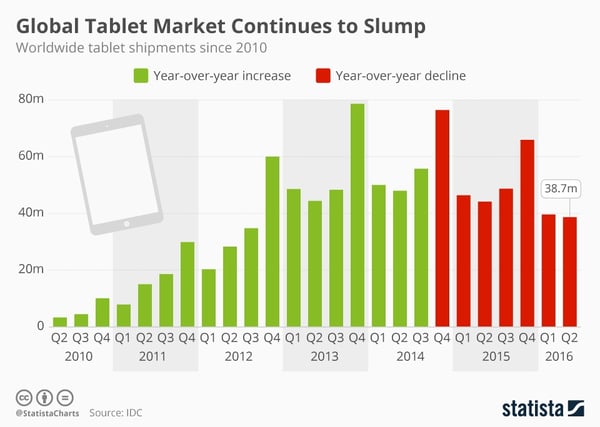 Give me a big phone or a portable laptop please

When Steve Jobs first launched the iPad back in 2010 - yes it was that long ago - it was a phenomenon. In typical Jobs-style, the iPad was another device from Apple that we didn't know we wanted.

The iPad stood alone, filling a wide gap in the market between the mobile phone and the laptop.

At the time mobile phone screens were small, around a 1/3 to 1/2 what they are today. Meanwhile laptops were heavy with short battery lives, and no touchscreen.

Seven years on, and the canyon between mobile phones and laptops has shrunk to a cranny. Phones are larger and we have the added option of the Plus size model. Laptops are lightweight, have detachable keyboards, and don't have the limitations of mobile software.

And it seems people are voting for a bigger phone or a laptop instead of a tablet.

Bearing out this trend, is the rise of the Plus-size iPhone.

For the first time ever in Q1 2017, the larger version of the newest iPhone iteration - the iPhone 7 Plus outsold the standard iPhone 7.

According to data from Slice Intelligence, for every iPhone 7 that Apple sold, it sold roughly three iPhone 7 Plus devices.

The increased popularity of the Plus size model was confirmed by Tim Cook when discussing last week's Apple results ...

the iPhone 7 Plus saw "the highest portion of the new product mix than we've ever seen with Plus models in the past". 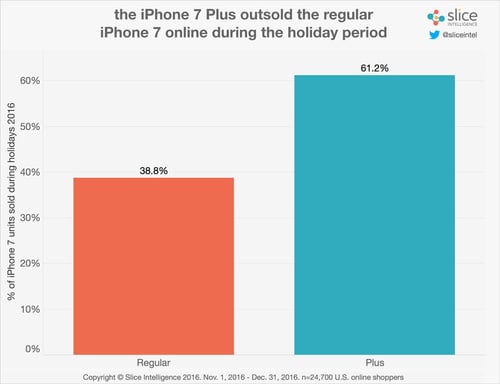 You've got to want an iPad for itself

So herein seems to be the nub of the problem. Tablets are great - to a point. They are a terrific portable internet browsing device, convenient for reading, watching a movie, writing a few emails, keeping the kids entertained and playing some lightweight games.

But they are not great at replacing a laptop, and as phone screens get larger and smarter we are  compromising and using these devices for many of the activities that we would have preferred to do on a tablet.

Consumers whose budget does not allow for the laptop, tablet and phone trifecta, are opting to get by with a bigger phone and a laptop.

Apple - and other tablet manufacturers - are going to have to come up with something new to send us rushing back to purchase.