The Samsung Fold has still failed to materialise a month after review devices sent to the media developed major screen and hinge issues. What is next for the Fold?

Just days before the anticipated April 26 launch,  Samsung sent about 50 units of the device to journalists, analysts and bloggers in the United States. Within 24 hours, reports were circulating of screen defects and breakage.

At least four units sent to journalists and a YouTube personality contained problems, according to posts on Twitter.

There appeared to be two separate issues in play. Firstly a 'screen protector' covering the width of the Fold turned out to not be a screen protector but an integral part of the device. When reviewers tried to removed the 'protector', the screen immediately began to spark and cut out. 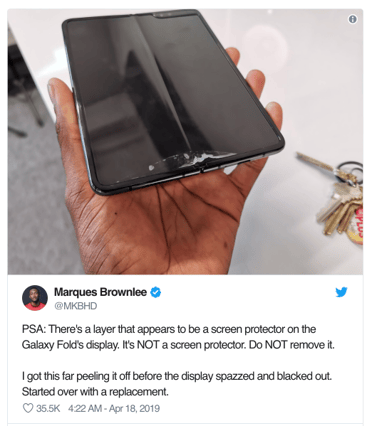 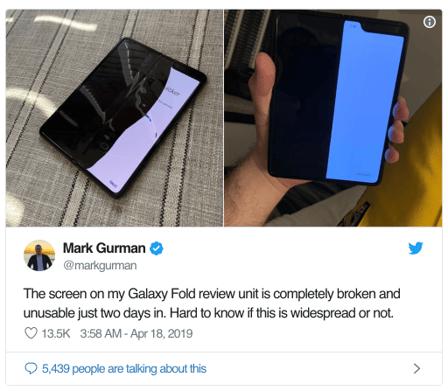 The second issue was described by The Verge as a "screen bump" and the reviewer speculated it may be related to grit, or some other pocket-dwelling body, becoming lodged beneath the screen and eventually pushing through it. That, or part of the hinge mechanism breaking loose on the inside.

Samsung halt release, no new date as yet

Samsung responded to the issues by immediately halting the release.

To fully evaluate this feedback and run further internal tests, we have decided to delay the release of the Galaxy Fold. We plan to announce the release date in the coming weeks.

Initial findings from the inspection of reported issues on the display showed that they could be associated with impact on the top and bottom exposed areas of the hinge. There was also an instance where substances found inside the device affected the display performance.

We will take measures to strengthen the display protection. We will also enhance the guidance on care and use of the display including the protective layer so that our customers get the most out of their Galaxy Fold.

To date no new release date has been announced.

What will this mean for Samsung?

It has long been intimated by tech media that Samsung was more intent on being first to market and recognised for its innovation, than it was in the sales of its new foldable device.

At A$2,750 the device was unlikely to have mass-market appeal. However, while it may not impact on Samsung's bottom line, it is still an embarrassment for the manufacturer.

Patrick Moorhead, founder of Moor Insights & Strategy, said the company did not have much to lose over the setback.

"It's certainly an embarrassment to Samsung's reputation but this won't have much financial impact on them since they created a whole new category of 'foldables' with this product. There is no market share to lose."

It's not good that we're seeing this endless flow of design flaws from Samsung and products that are flagship products—products that are selling for a lot of money. I think this one is gonna make people think twice about spending $2,000 on it.