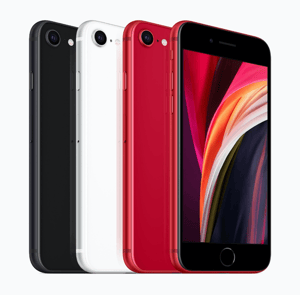 Apple has announced a new iPhone outside the month of September for the first time since 2016, and outside of autumn for only the second time in a decade.

Apple's popular first-gen iPhone SE was discontinued in September 2018, and fans of small, affordable handsets have been asking for a replacement ever since. At long last, they've got it - although it isn't quite as small this time around.

The iPhone SE for 2020 takes its design cues from the iPhone 8 and will reportedly fit into iPhone 8 cases, so this isn't a return to the ultra-compact 4” design of the iPhone SE (2016), nor will we get the squared-off corners of the iPad Pro range - both of which were touted, and in some cases demanded, in the run up to the launch.

There's only a single camera lens on the rear, and it keeps the Home button - so Touch ID is the order of the day rather than Face ID.

While a solid offering, don't expect envelope-pushing specs and features at this price. Device specs include:

The standout inclusion there is clearly the A13 Bionic chip, which is state of the art in Apple Land and matches the iPhone 11 and 11 Pro (although it may be matched here with less RAM - something that Apple doesn't announce). The added power of the A13's neural engine should enable the seemingly unimpressive camera setup to produce excellent shots.