The 2017 Google I/O annual developer gathering has unveiled an array of ideas. Here's our top six most interesting innovations and milestones...

Google I/O is a developer conference held annually by Google in San Francisco, California.The 2017 event took place from 14-20 May.

I/O was first held in 2008. "I/O" stands for input/output, and also refers to the slogan "Innovation in the Open".

Here is our pick of the top six most interesting 2017 innovations and milestones:

Android is the cream of the crop but Google also boasts seven other services which have reached 1 billion users: Google Maps, YouTube, Chrome, Google Maps, Gmail, Search, and Google Play.

Other big stats include: Users downloaded 82 billion apps during 2016 and also watched over 1 billion hours of  YouTube video each day.

Google Drive now has 800 million users, and Google Photos has crossed the 500 million monthly user mark. Meanwhile Google Assistant is now available on over 100 million devices and across 70 different devices.

By comparison, 18 months ago, Apple announced it had over 1 billion iOS devices in active use. It hasn’t updated that milestone yet.

Google takes search to the next level with the introduction of Google Lens. This is new visual search technology that can recognise objects and provide information and actions.

Google offered up a few demos of how Lens might be useful. In one, Lens was shown the label on the bottom of a Wi-Fi router. It correctly identified the SSID and password, then offered to log the phone into the network. In another, Lens was shown a restaurant storefront (see below). It figured out what it was and offered reviews from Maps. Finally Lens was shown a wildflower which it identified by species with additional information.

GPS is for outdoors. Google has now developed VPS for indoors.

In a game-changer for the visually impaired, and  a useful tool for those who get lost in shopping malls, Google unveiled the new VPS technology at I/O.

Hold up your phone in a department store like Ikea, and follow turn-by-turn directions to get you to the right aisle and exact shelf where the item you want is.

Just check out what Google Home and Assistant can do now!

Google Assistant is now on 100 million devices and that number is likely to rise when it expands to Portuguese, Japanese, German, and French languages. At I/O, Google also announced that Assistant is now also available for iPhones.

Meanwhile Google have teamed Assistant up with their Home smart speaker to direct the right information to the right connected screen. Say: “OK Google, show my calendar for today” and Home can instantly display your day’s events on a Chromecast-connected TV. Ask Home for directions to a place or event, and it will send the directions right to the Google Maps app on your phone.

Home can now make phone calls (but only in the United States and Canada initially),  control Netflix, HBO Now, Hulu, SoundCloud, Spotify, Deezer, and more. Even better, Google is opening up access to Home’s Bluetooth radio, meaning you can treat it just like any other Bluetooth speaker.

Now your new car will have a new Android OS - well it will if you buy a Volvo or Audi!

To date car infotainment systems have been hit and miss. Android currently ships in several cars, but Google has never been involved before. Any Android car OSes out there today exist because a car manufacturer grabbed the Android source code on their own and reconfigured it into a car operating system, all without Google's help. The result is something that is very out of date when it hits the market.  The current 2017 Honda Accord runs Android as the car OS, but it's version 4.2 Jelly Bean, an OS from 2012. Hyundai is even worse, shipping an Android 2.3 Gingerbread-based system on the 2017 Genesis.

With Google's involvement, car manufacturers will ship much newer versions of Android. Both the Volvo and Audi on display were running Android 7.0, with a plan to move the system to Android O once it becomes final. Android O was built with a particular eye toward automotive, with features that will really help car use cases (for instance, it has a quicker startup time). 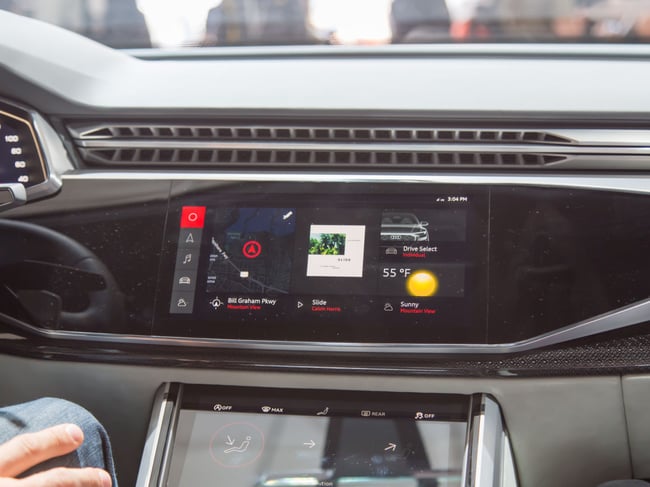 They already have 2 billion users and the way that Google aim to get a billion more, is with Android Go.

Android Go will be a lightweight version of the upcoming version of Android (Android O) with optimised apps and Play Store.

Go will focus on devices with very low specs, users with limited connectivity and will run on devices with less than 1GB of memory. The Play Store is going to highlight apps that can run on these cheap devices. These apps will be less than 10MB, work well when not connected to the internet and support devices with slow systems-on-a-chip and little RAM.

Meanwhile Android O is the codename for the next iteration of the Android operating system. We are currently on N for Nougat. The second developer release of Android O (maybe Oreo?) occurred during I/O. The public version of Android O will be out for supported Pixel, Nexus and Android One devices sometime in Q3, most likely in late August or early September.