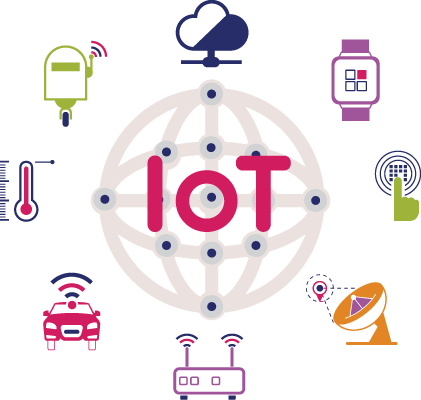 The Internet of Things (IoT) refers to using embedded modules, routers and other edge devices to connect a wide variety of “things” – s

treet lights, rubbish bins, unmanned aerial vehicles (drones), power generators, smart meters, water-treatment systems, electric vehicle chargers, air compressors – to the internet. With the IoT, we can collect information from and send information to these things, enabling us to monitor, manage, control, and optimize their operation in ways that were not possible before.
The IoT is transforming the economy, helping entire industries move to subscription-based models, and fundamentally changing how the wo

rld does business with myriad applications that can make farming more efficient and sustainable, the power grid greener and more stable, supply chains smarter, industrial equipment more reliable and roads and sidewalks safer. The IoT is enabling manufacturers to build relationships with end-users.

Given these and the other economic, environmental and quality of life benefits generated by the IoT, today almost every business, government agency or other organization has or is in the process of developing, deploying or using a number of IoT applications, and this trend will continue to accelerate over the coming years. This means it is essential for organizations to understand what the IoT is and how it works.

However, the IoT’s very nature – an interconnected network of different sensors, devices, networks and clouds – means that understanding it requires an understanding of a slew of different technologies. New edge-to-cloud and other IoT solutions are attempting to simply this complexity, enabling organizations to focus less on the underlying IoT technological infrastructure and more on the IoT applications themselves. Still, for those seeking to understand the impact of the IoT on their organization – including the opportunities the IoT presents for stronger customer relationships, faster innovation, and new revenue streams – a basic understanding of the technology underlying the IoT is essential.

While not comprehensive, this “What is” glossary is designed to provide simple definitions of some of the most important cellular IoT terms, since, cellular is the best wireless option for most IoT applications. It is not meant to be highly technical or exhaustive. Instead, it is an easy-to-access resource for people seeking to improve their understanding of what the IoT actually is, so they can better manage their current IoT applications and plan future IoT initiatives.

5G LTE represents an improvement on existing 4G LTE technologies, offering faster speeds, higher reliability and lower latency. It is backwards compatible with 4G LTE—unlike other cellular evolutions, 5G was built to coexist with 4G—providing a smooth migration path from 4G LTE and eliminating the risk of deploying 4G LTE devices today. It also includes support for existing LTE-M and NB-IoT technologies for Low Power Wide Area (LPWA) use cases such as low-cost asset monitoring and tracking IoT applications that send less data than other IoT use cases.

5G NR is a new technology that uses a much wider range of frequency bands than existing wireless technologies [including millimeter wave (mmWave) bands as high as 100 GHz]. This enables 5G NR to deliver massive improvements in capacity, density, spectrum, and network efficiency than other cellular technologies.

What is an Embedded Universal Integrated Circuit Card (eUICC)?
What is an eSIM (Embedded Subscriber Identity Module) card?

In cellular-connected devices, the SIM (Subscriber Identity Module) contains the credentials or subscription needed to access the service of a particular MNO (Mobile Network Operator) or MVNO (Mobile Virtual Network Operator). Since the beginning of GSM, the SIM has been the property of the MNO or the MVNO, creating a lock-in effect. There is a permanent relationship with the network carrier, since the SIM won’t work with the subscriptions of other carriers. If you want to change your carrier, you have to change the SIM, too.

However, this is changing. A new kind of SIM, which can be remotely provisioned to work with a new subscription, gives the customer ownership of the SIM. The SIM becomes just another part of the device, like the power source or the user interface, and is controlled by the user.

This new kind of SIM, referred to either as an eSIM (Embedded SIM) or an eUICC (Embedded Universal Integrated Circuit Card), works with any operator subscription in any part of the world, supports multiple subscriptions, and can be programmed to change subscriptions, as required, with an OTA (Over-The-Air) update. The eSIM is a significant shift in how you manage cellular connectivity, because it lets you change service providers without swapping out the SIM or having any other physical access to the device.

The terms “eSIM” and “eUICC” are used interchangeably in the market, however “eSIM” can refer to the entire solution for permanently deploying a reprogrammable SIM card, including the hardware, software and management platform needed for deployment. The term “eUICC” can refer only to the specific technology on the SIM itself. This can be an important distinction, because eUICC technology can be placed in a SIM that is soldered into the system (for a truly embedded SIM) or made part of the more traditional plastic form factor SIM. Remote provisioning capabilities, enabled by eUICC technology, can be added to any SIM form factor (2FF, 3FF, 4FF, MFF2), and can be used in any operating environment, fromautomotive and industrial to consumer.

What is Firmware Over-the-Air (FOTA)?

FOTA is a mobile software-management technology for wirelessly upgrading the operating firmware of mobile devices. FOTA enables organizations to more easily and cost-effectively maintain the health of their edge devices. This improves security and enables these devices to remain in the field for longer periods of time without hands-on maintenance or the need to replace them.

What is a Global Navigation Satellite System (GNSS)?

A GNSS is a satellite constellation that deliver positioning, navigation, and timing (PNT) services. The United States Global Positioning Service (GPS) is the most well-known GNSS. With GNSS modules and IoT gateways with GNSS capabilities, companies can add location-based services to their IoT applications.

What is the Industrial Internet of Things (IIoT)?

The Industrial IoT refers to IoT technologies that, in combination with new cloud, Artificial Intelligence (AI) and other technologies, enable manufacturing, energy, agriculture and other industrial companies to fuse our physical, digital, and biological worlds in ways that increase operational efficiency and otherwise create new types of value. This transformation, which many have described as Industry 4.0, is resulting in the deployment of a variety of revolutionary new applications that connect industrial equipment to the cloud, including new predictive maintenance, equipment-as-a service (EaaS), asset tracking and factory process control applications.

What is an IoT Gateway?

IoT gateways are the embedded modules, cellular routers and gateways, and other edge devices that connect industrial equipment, appliances and other “things” in the field to cellular, Wi-Fi, and other networks – networks that then connect these things to the cloud or on-premises IT systems.

IoT gateways are an essential component of the IoT. All data that moves through the IoT has to move through an IoT gateway at some point.

What is IoT Network Management?

What is a Low-Power Wide-Area (LPWA) network?

This makes LPWA perfect for many IoT applications where the amount of data that needs to be transmitted is minimal, such as applications for asset tracking and the monitoring and management of “smart” home batteries and safety shoes.

What is LTE (Long-Term Evolution)?

What is LTE-A (LTE Advanced)?

LTE-A is a major enhancement of LTE. It improves capacity and coverage compared to LTE and introduces a multicarrier capability to be able to take advantage of ultra-wide bandwidth, up to 100 MHz of spectrum, supporting very high data rates.

What is LTE-A Pro?

LTE-A Pro, also known as 4.5G or 4.5G Pro, is an enhancement to LTE-A. It supports data rates of 3 Gbps or higher using 32-carrier aggregation. It also introduces the concept of License Assisted Access, which allows sharing of licensed and unlicensed spectrum.

What is LTE-M (Long Term Evolution for Machines)?

LTE-M, sometimes also referred to as LTE Cat-M1 or enhanced machine-type communication (eMTC), is a 3GPP LPWA technology standard that provides data transmission rates of up to 350kbps, making it ideal for voice, roaming, and other real-time fixed or mobile IoT applications.

What is Machine-to-Machine (M2M) communications?

What is the Narrowband Internet of Things (NB-IoT) standard?

NB-IoT, sometimes also referred to as NB1 or Cat-M2, is a 3GPP LPWA technology standard that can transmit data at rates up to 65kbps, making it more well-suited for agricultural, pipeline monitoring or other static sensor IoT applications.

What are the differences between NB-IoT and LTE-M? Here’s a guide to help.

The IoT and the technologies that support it will continue to be a source of new standards, devices, software and IT solutions, which means there will always be new terms to define. It’s also important to note a couple key terms that fall outside the realm of technical cellular protocols and focus on what we’re all after from IoT applications: data.

What is Data Orchestration?

Data orchestration technologies intelligently distribute business logic and processing capabilities across the entire IoT – the cloud, local networks, and edge devices. Data orchestration technologies make it easier and less expensive for companies to orchestrate data from edge devices to the cloud, simplifying and accelerating their efforts to build, deploy, manage, and secure IoT applications – especially when these applications use power, bandwidth, and processing constrained edge-devices.

What are Edge-to-Cloud IoT solutions?

Edge-to-cloud IoT solutions, like Sierra Wireless’s Octave™ solution for connecting industrial assets, enable companies to build, deploy, manage, and update IoT applications end-to-end – from the module, router, gateway or other edge device, through cellular, Wi-Fi and other networks, to the cloud. For example, edge-to-cloud IoT solutions allow companies to easily manage all their edge devices’ wireless connectivity and update these devices’ firmware over the air.
In addition, in combination with data orchestration technologies, edge-to-cloud solutions enable enterprises to update and enhance the capabilities of their IoT applications by changing the way they collect, filter, and prioritize data, and by integrating this data into a variety of ERP, CRM, data analytics and other cloud-based IT systems. With edge-to-cloud IoT solutions, companies can securely extract, orchestrate, and act on all the equipment and other asset data generated by their IoT applications.

What other key terms would you add to the list? Let us know, and be sure to Start with Sierra to keep up to date on all the latest IoT developments and how your organization can benefit from them