Businesses are feeling intense pressure to deliver mobile apps, but when they try to do the right thing by asking the people who will use them what they need, it often leads to frustration and failure.

Mobile Apps are not Desktop Apps

Mobile Apps are not applications, but often enterprises looking to develop mobile apps do so from the start point of an existing desktop application and this can be the first mistake.

Some of the key differences between mobile apps and desktop apps are:

One of the main difficulties arising out of asking users what they want in a mobile app is that they do not know what makes a good mobile app.

Because users are being asked about the need for a mobile app in an environment where enterprise mobile apps most likely do not yet exist, the users are likely to discuss needs from the perspective that they are familiar with - the desktop. This frame of reference leads to requests that are inappropriate for mobile apps.

Users tend to talk about features they require in an app, rather than the outcome. They may also have unrealistic expectations about what can be delivered on a mobile platform (see table below). 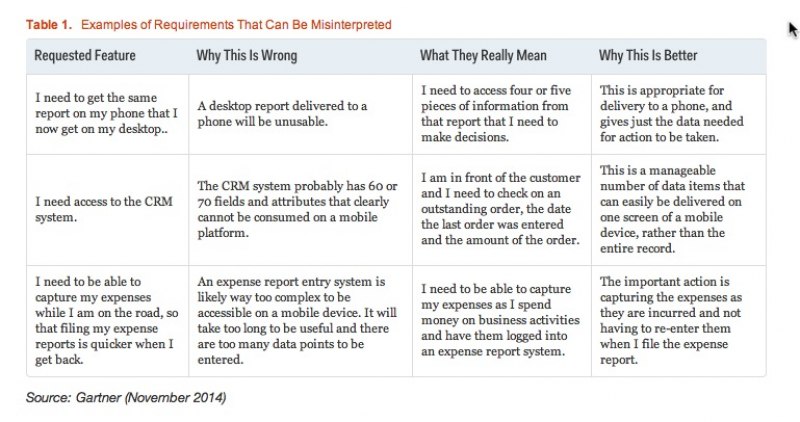 Development teams that are user-led will try to deliver features in a mobile app that users ask for. However these requests often arise from a poorly defined frame of reference based on existing processes and result in complexity that can not be reasonably accommodated in the mobile environment.

Development teams that are user-centric will listen to end users, recognise what their requests really mean, and define requirements for mobile apps that fit the behavioural characteristics, while addressing the device limitations. In short, they need to translate what they hear from users into what is appropriate and valuable for mobile.