Atomic Battery - Explained - Is this the future? An atomic battery, nuclear battery, tritium battery or radioisotope generator is a device which uses energy from the decay of a radioactive isotope to generate electricity. Like nuclear reactors, they generate electricity from nuclear energy, but differ in that they do not use a chain reaction. Compared to other batteries, they are very costly, but have an extremely long life and high energy density, and so they are mainly used as power sources for equipment that must operate unattended for long periods of time, such as spacecraft, pacemakers, underwater systems and automated scientific stations in remote parts of the world.[1][2]

Nuclear battery technology began in 1913, when Henry Moseley first demonstrated the beta cell. The field received considerable in-depth research attention for applications requiring long-life power sources for space needs during the 1950s and 1960s. In 1954 RCA researched a small atomic battery for small radio receivers and hearing aids.[3] Since RCA's initial research and development in the early 1950s, many types and methods have been designed to extract electrical energy from nuclear sources. The scientific principles are well known, but modern nano-scale technology and new wide-bandgap semiconductors have created new devices and interesting material properties not previously available. 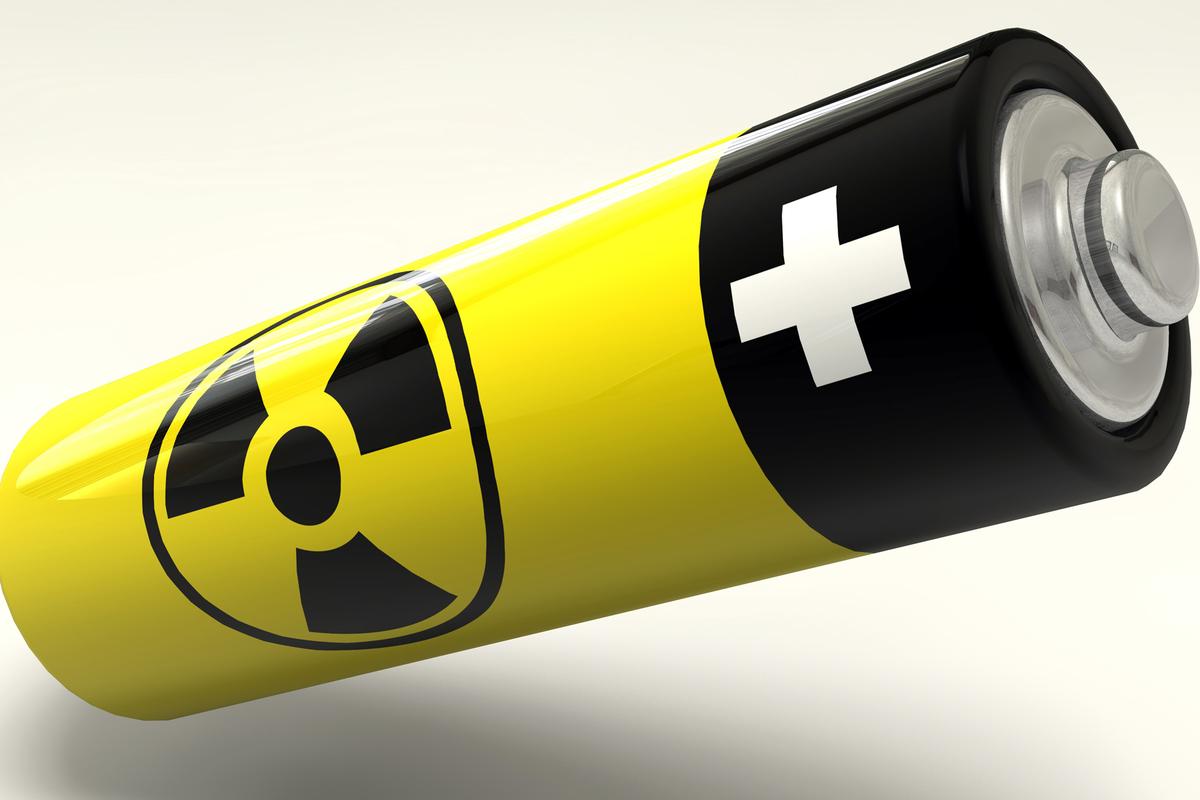 Batteries using the energy of radioisotope decay to provide long-lived power (10–20 years) are being developed internationally. Conversion techniques can be grouped into two types: thermal and non-thermal. The thermal converters (whose output power is a function of a temperature differential) include thermoelectric and thermionic generators. The non-thermal converters (whose output power is not a function of a temperature difference) extract a fraction of the incident energy as it is being degraded into heat rather than using thermal energy to run electrons in a cycle. Atomic batteries usually have an efficiency of 0.1–5%. High-efficiency betavoltaics have 6–8%.[4]

A thermionic converter consists of a hot electrode, which thermionically emits electrons over a space-charge barrier to a cooler electrode, producing a useful power output. Caesium vapor is used to optimize the electrode work functions and provide an ion supply (by surface ionization) to neutralize the electron space charge.[5]

A radioisotope thermoelectric generator (RTG) uses thermocouples. Each thermocouple is formed from two wires of different metals (or other materials). A temperature gradient along the length of each wire produces a voltage gradient from one end of the wire to the other; but the different materials produce different voltages per degree of temperature difference. By connecting the wires at one end, heating that end but cooling the other end, a usable, but small (millivolts), voltage is generated between the unconnected wire ends. In practice, many are connected in series (or in parallel) to generate a larger voltage (or current) from the same heat source, as heat flows from the hot ends to the cold ends. Metal thermocouples have low thermal-to-electrical efficiency. However, the carrier density and charge can be adjusted in semiconductor materials such as bismuth telluride and silicon germanium to achieve much higher conversion efficiencies.[6]

Non-thermal converters extract a fraction of the nuclear energy as it is being degraded into heat. Their outputs are not functions of temperature differences as are thermoelectric and thermionic converters. Non-thermal generators can be grouped into three classes.

In the first type, the primary generator consists of a capacitor charged by the current of charged particles from a radioactive layer deposited on one of the electrodes. Spacing can be either vacuum or dielectric. Negatively charged beta particles or positively charged alpha particles, positrons or fission fragments may be utilized. Although this form of nuclear-electric generator dates back to 1913, few applications have been found in the past for the extremely low currents and inconveniently high voltages provided by direct-charging generators. Oscillator/transformer systems are employed to reduce the voltages, then rectifiers are used to transform the AC power back to direct current.

English physicist H. G. J. Moseley constructed the first of these. Moseley’s apparatus consisted of a glass globe silvered on the inside with a radium emitter mounted on the tip of a wire at the center. The charged particles from the radium created a flow of electricity as they moved quickly from the radium to the inside surface of the sphere. As late as 1945 the Moseley model guided other efforts to build experimental batteries generating electricity from the emissions of radioactive elements.

Betavoltaics are generators of electric current, in effect a form of battery, which use energy from a radioactive source emitting beta particles (electrons). A common source used is the hydrogen isotope, tritium. Unlike most nuclear power sources, which use nuclear radiation to generate heat, which then generates electricity (thermoelectric and thermionic sources), betavoltaics use a non-thermal conversion process, using a semiconductor p-n junction.

Betavoltaics are particularly well-suited to low-power electrical applications where long life of the energy source is needed, such as implantable medical devices or military and space applications.

Alphavoltaic power sources are devices that use a semiconductor junction to produce electrical particle from energetic alpha particles.[8][9]

An optolectric nuclear battery has also been proposed by researchers of the Kurchatov Institute in Moscow. A beta-emitter (such as technetium-99) would stimulate an excimer mixture, and the light would power a photocell. The battery would consist of an excimer mixture of argon/xenon in a pressure vessel with an internal mirrored surface, finely divided Tc-99, and an intermittent ultrasonic stirrer, illuminating a photocell with a bandgap tuned for the excimer. The advantage of this design is that precision electrode assemblies are not needed, and most beta particles escape the finely divided bulk material to contribute to the battery's net power.

Electromechanical atomic batteries use the buildup of charge between two plates to pull one bendable plate towards the other, until the two plates touch, discharge, equalizing the electrostatic buildup, and spring back. The mechanical motion produced can be used to produce electricity through flexing of a piezoelectric material or through a linear generator. Milliwatts of power are produced in pulses depending on the charge rate, in some cases multiple times per second (35 Hz).[10]

Atomic batteries use radioisotopes that produce low energy beta particles or sometimes alpha particles of varying energies. Low energy beta particles are needed to prevent the production of high energy penetrating Bremsstrahlung radiation that would require heavy shielding. Radioisotopes such as tritium, nickel-63, promethium-147, and technetium-99 have been tested. Plutonium-238, curium-242, curium-244 and strontium-90 have been used.[11]

Nuclear engineers at the University of Wisconsin, Madison have explored the possibilities of producing minuscule batteries which exploit radioactive nuclei of substances such as polonium or curium to produce electric energy. As an example of an integrated, self-powered application, the researchers have created an oscillating cantilever beam that is capable of consistent, periodic oscillations over very long time periods without the need for refueling. Ongoing work demonstrate that this cantilever is capable of radio frequency transmission, allowing MEMS devices to communicate with one another wirelessly.

These micro-batteries are very light and deliver enough energy to function as power supply for use in MEMS devices and further for supply for nanodevices.[12]

The radiation energy released is transformed into electric energy, which is restricted to the area of the device that contains the processor and the micro-battery that supplies it with energy.[13]:180–181