Alone Together: The impact screens are having on our family time

Research has shown that screen-time is keeping us at home together more often, but we are not using the extra time to talk to each other. 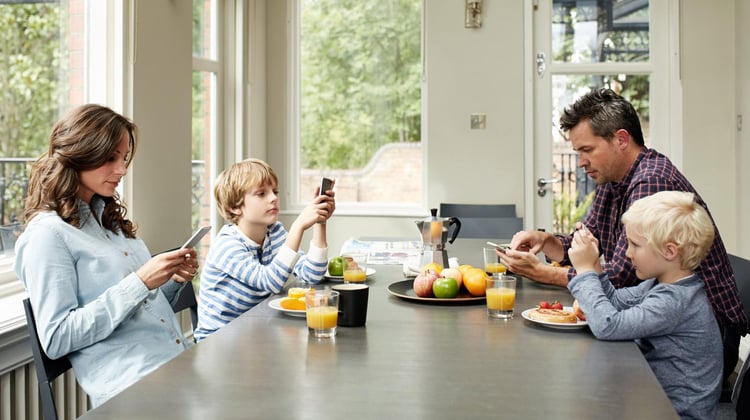 My household reflects a typical Friday early evening at homes across Australia.

The family is all at home together...alone.

Spending more time together, but not interacting

Contrary to expectations, we found that children spent more time around their parents in 2015 than in 2000. This was a surprising finding.

But looking closer, we found that children reported they were “alone” during all of this additional time at home with their parents. In this sense then, “alone together” time has increased.

Even when we are 'together-together' we check screens!

But it also showed even when we are engaged in activities together, we are spending around 90 minutes of that time each day on our screens.

The same pattern held when watching TV together: kids checked devices for about 5 out of the 30 minutes they were watching, while parents spent 7 minutes on their phones during the same period.

The perception that it’s all of the time, that the use of devices has taken over shared family activities — we can show that it’s not that much time.

But that doesn’t mean it’s not important or not experienced as problematic. Even if the moments spent staring at a screen are short, the impact of these interruptions could be huge.

In 2015, children and parents used mobile devices for:

Children go outside the home less

Mullan said the move towards spending more time in the home is at the expense of spending time outside the home. He suggests this could be due to parental worries about safety, and the reduction of public places where kids that might go together, such as libraries and parks.

He said he’s most curious about the context behind the data: are kids at home (alone or alone-together with their family) because there is nowhere to go? Because they are not allowed? Or because the lure of technology is too great?