By 2020, there will be 5.5 billion mobile users, representing 70 percent of the global population according to the February 2016 release of the Cisco Visual Networking Index"¢ (VNI) Global Mobile Data Traffic Forecast (2015 to 2020).

5.4 billion people will have mobile phones including "phablets"  - a combination of smartphone and tablet features. This is more than will have electricity (5.3 billion), running water (3.5 billion) or cars (2.8 billion).

The adoption of mobile devices, increased mobile coverage, and demand for mobile content are driving user growth two times faster than the global population over the next five years.

This surge of mobile users, smart devices, mobile video and 4G networks will increase mobile data traffic eight-fold over the next five years, according to Cisco. 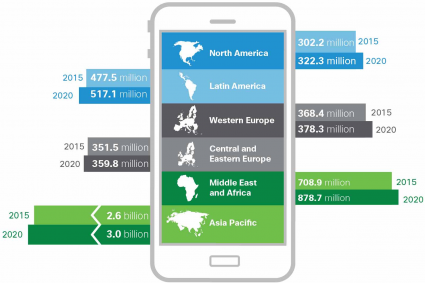 Consumer and business users' demand for higher video resolution, more bandwidth, and processing speed will increase the use of 4G connected devices.

4G will represent more than 70 percent of all mobile traffic, and 4G connections will generate nearly six times more traffic per month than non-4G connections by 2020.